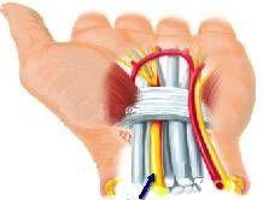 Carpal tunnel syndrome (KTS, synonyms among others: Carpal tunnel syndrome, CTS, medianus compression syndrome, brachialgia paraesthetica nocturna) describes a nerve constriction of the medianus nerve, which can lead to a degeneration or atrophy of the thumb ball muscles and typically to nocturnal sensory disturbances. Women (especially those between 40 and 60 years of age) are affected more frequently than men (mostly with the primary working hand, often at night) in a ratio of 3:1.

Anatomy
Carpal tunnel syndrome is a “nerve constriction” in the area of the flexor side of the wrist. Here there is a wide band that stretches between the ball of the thumb and the ball of the little finger, directly above the wrist. This ligament is the roof of a deep tunnel-like canal (carpal tunnel). This channel contains, among other things, one of the three hand nerves – the median nerve. In carpal tunnel syndrome, this nervus medianus is constricted in this canal and put under pressure (see figure blue arrow on yellow nerves). Due to this constriction, the nerve supply of the hand behind the ligament is disturbed.

Causes
The pressure on the nerves causes pain. The pain is especially strong at night. The clinical picture can progress further and cause a persistent numbness, which extends particularly to the thumb, index and middle finger.
If the disease remains untreated for many years, the thumb ball muscles can also atrophy. In this case the thumb can no longer be placed powerfully opposite the fingers.
The main reasons are constrictions of the carpal canal due to bone fractures, acromegaly, a tumour or increased growth of the above-mentioned ligament.
Especially the increasing use of computers, caused by the use of the keyboard and the “mouse”, causes a significant increase in the area of diagnosed carpal tunnel syndromes.

Symptoms
Often begins with falling asleep and tingling paresthesias = “ant walking” on the tip of the middle finger. One-sided movements of the wrist e.g. when talking on the phone or riding a bike trigger the complaints like the feeling of a swollen hand. The pain in the whole hand, possibly also when stepping on the forearm, usually occurs at rest, usually at night.

History
Increasingly, the symptoms also occur during the day. Patients often report “clumsiness”, e.g. holding a coffee cup, and sudden “weakness” of the hand. The sensitivity of the skin on the thumb, index, middle and ring fingers is increasingly reduced. In later stages, the thumb ball muscles can be lost and fortunately, in the meantime, it is rarely possible to completely lose the sensitivity (skin feeling) in the hand.

Risk factors
These include diabetes mellitus (“diabetes”), malfunctions of the thyroid gland or fractures in the wrist area that have occurred.

Diagnostics
If there is a compression of the median nerve in the hand area, this can be determined by measuring the “nerve currents” (= ENG / EMG) at the neurologist (= neurologist, specialist in neurology). Note: It is quite possible that pressure damage to a nerve in the hand, shoulder and neck area occurs simultaneously!

X-rays / MRT
The X-ray examination of the hand and wrist is carried out as a basic diagnostic procedure in order to clarify or rule out arthrosis of the thumb saddle joint, for example. Magnetic resonance imaging (MRT) is only useful if there is a suspicion of an unclear mass, e.g. a tumour.

Therapy
Carpal tunnel syndrome does not always require surgery. In the so-called early stages, it is often sufficient to take a vitamin B complex preparation or interventional therapy of the nerve itself. The therapy is additionally optimised by a specially adapted night positioning splint. Only if the symptoms persist and in order to prevent irreversible damage to the nerve, an operation should be considered. When deciding whether an operation is sensible or not, the clinical experience of the hand surgeon and/or nerve specialist (neurologist = specialist in neurology) is equally important for you. Despite a successful operation and with the correct surgical technique, there is always the possibility that nerve compression will occur again.