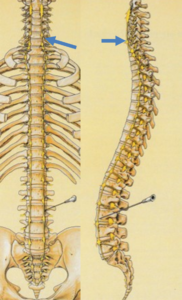 The stellate block (blue arrows in the picture) is the targeted local conduction anesthesia of the ganglion stellatum. It is used to relieve arteriovenous spasms (vascular spasms), because blood vessels are sympathetically innervated. This blockage leads to vasodilatation (vasodilatation) in the entire catchment area, reduced sweat secretion (anhidrosis) and Horner’s syndrome. The latter is a sign for the successful execution of the blockade.
The blockade of the stellate ganglion is therefore useful in cases of circulatory disorders and associated pain in the area of the head (e.g. after a craniocerebral trauma), neck (including painful restriction of movement in the cervical spine), arms (and a. periarthritis of the shoulder joint or frozen shoulder, phantom pain after amputation in the catchment area of the sympathetic fibres) and the upper chest wall as well as in the case of diseases of the ear such as Meniere’s disease, acute hearing loss and tinnitus. In case of tinnitus, the early start of treatment is crucial (complete healing in 80% of patients within a period of up to 6 weeks after the onset of the disease and the application of up to 10 blocks).
The Stellate block is also used for migraine, hemiplegic headache, trigeminal and acute zoster neuralgia. Surgical removal of the stellate ganglion is the last resort in Raynaud’s disease (a vascular disease that causes cramp-like constriction of the blood vessels and reduced blood flow in the fingers and toes).
The injection is administered in a supine position at the level of the 6th cervical vertebrae. This can lead to a Horner syndrome consisting of a narrowing of the pupil (miosis), drooping of the upper eyelid (ptosis) and an eyeball that has sunk slightly into the eye socket (enophthalmos). However, this Horner syndrome recedes as the sympathetic blockage subsides.

The lumbar sympathetic nerve block (cannulas at the bottom of the figure) is used for pain (causalgia = burning pain in sympathetic reflex dystrophy or Sudeck’s disease, acute herpes zoster) and circulatory disorders in the legs and pelvic organs.
The lumbar sympathetic blockade is performed in the prone position at the level of the lumbar vertebrae 2-4.

Typical side effects and complications such as incorrect injections into blood vessels, the intervertebral disc, the abdominal cavity or the psoas muscles can be avoided if the needle position is constantly monitored with a C-arm and contrast medium during insertion until the target region is reached.