Disorders of foot and ankle

The feet enable humans to perform their upright posture and walking. The foot itself is divided into forefoot, middlefoot and rearfoot. The foot (Pes) consists of foot root (tarsus), the middle foot (metatarsus) and the toes (digiti pedis). The ankle bone (Talus) of the foot root is connected to both bones of the lower leg (shin and calf bone) by the upper ankle (Articulatio talocruralis). Thereby the lower parts of the tibia (shin bone) and the fibula (calf bone) form the knuckles being connected by a tight ligament (tibiofibular syndesmosis), which clutches the articular surfaces of the talus (anklebone) forceps-like. This type of bone conduction and the strong developed lateral ligaments cause, that in the upper ankle only bending and stretching (plantar and dorsal flexion) around a perceived, transverse axis through the knuckles can be done. The other tarsal bones, the navicular bone, the three cuneiform bones and the cuboid bone are smaller than the ankle (talus) and the heel bone (calcaneus) and are fit in between this and the metatarsal bones. Talus, calcaneus and navicular bone limit with their corresponding articular surfaces the lower ankle (talotarsal joint), which is divided by a strong ligament between the bones (talocalcaneal interosseous ligament) in a posterior (subtalar joint) and anterior cavity (talocalcaneonavicular joint). In this common joint the rotation motion around an oblique axis, the lifting of the internal (supination) and the external (pronation) take place. The interaction of upper and lower ankle ensures a fast and still safe walking even for difficult ground conditions. The other joints between the tarsal bones and the tarsal-metatarsal jonts are built as tight joints (=amphiarthroses), so that only an springy wobble is possible. In contrast the basic, middle and end joints of the toes can be bent and stretched. In the basic joints spreading movements are possible, too. The big toe (hallux) has only a basic and end joint (comparable to the thumb, which has also only two limbs). Construction and motion of the foot are adjusted to the upright standing and walking of humans. This corresponds to the double arch form of the foot. The foot skeleton is arched in the longitudinal and transverse direction as well. The longitudinal arch passes over the inner side of the foot, the external side is arched much less. In contrast the transverse arch is formed mainly in the area of the metatarsal and the adjacent cuneiform bones. The arches are specified by the form and position of the foot bones as well by the and maintained by the effects of ligaments and muscles. Thus in a normal formed foot the body weight rests on the heel and the heads of the 1st and 5th metatarsal bone as well as on those parts of the foot sole, which are padded especially by fatty tissue. A descent of the longitudinal arch usually results in the formation of a flatfoot, whereas the splay foot is formed mainly by descent of the transverse arch. From this starting position mixed forms like the pes valgoplanus result. 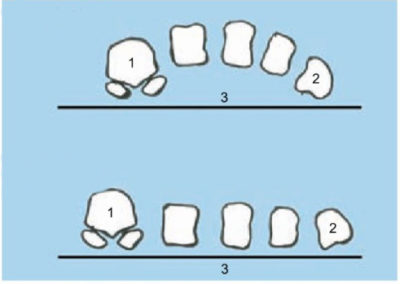 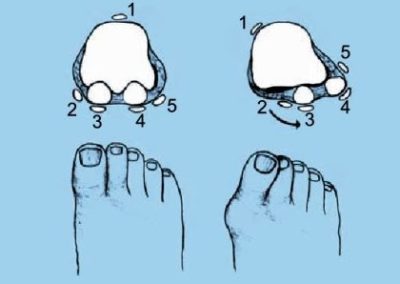 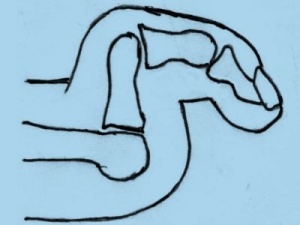 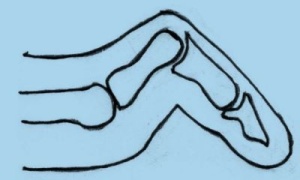 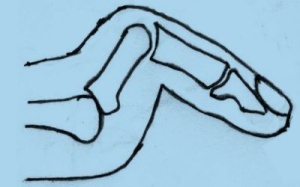 The splayfoot is the most common acquired foot deformity. It is almost always caused by the plantation. The lowering of the transverse arch of the foot causes foot complaints with widening of the forefoot. In practice, the splayfoot deformity clearly dominates and can cause various disorders in bones, joints and soft tissue. Hallux valgus as well as claw, hammer and claw toes and the tailor’s ball are usually found here.

Morton’s neuroma is characterized by acute, severe pain with the typical pain localization in the metatarsus at rest and under stress. During the clinical examination (pincer grip), pressure pain develops in the affected area. The neuromas (blue arrow in the figure) is a reaction with spindle-shaped distension of a N. digitalis plantaris proprii to a chronic mechanical irritation in the context of a bottleneck syndrome. Histologically (in the fine tissue examination) there is usually a fibrosis in the area of the nerve in chronic ischemia (lack of blood circulation). The clinical diagnosis is confirmed by ultrasound or magnetic resonance imaging (MRI). 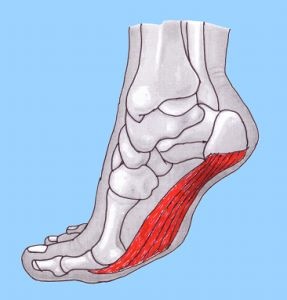 Plantar fasciitis is an irritation of the plantar aponeurosis or plantar fascia (red in the figure). This spans the longitudinal arch of the transverse arch as a fibrous band. It originates at the calcaneal tuber (heel bone), covers the sole of the foot, attaches itself to the inner and outer edges of the foot and is divided distally (toe to toe) into five parts that attach to the periosteum (periosteum) of the basic phalanges of the toes. In addition to protecting the soft tissues, the plantar aponeurosis serves to tension the arch of the foot longitudinally. The diagnosis is made by palpation of the entire plantar fascia and a sonography. A heel spur detected by x-ray is often of little significance in terms of the disease value itself

Ankle joint complaints are common because of the easy vulnerability (bone fractures, ligament injuries) and the high level of stress during life.
Distortions (sprains) can essentially lead to the following clinical pictures: